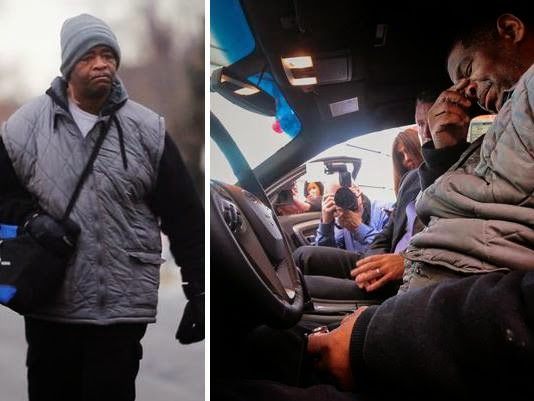 A Detroit man walks a total of 21 miles to and from work everyday. The dedicated worker says he enjoys his job and after his car broke down ten years ago he just did not have the money to purchase a new car. He states that his co-workers are just like his family. The 56 year old has been known to walk in hot or cold conditions, even snow. James Robertson's life changed tremendously when Blake Pollack noticed him walking everyday and decided to give him a ride. A college student by the name of  Evan Leedy was taken by this story and created a GoFundMe page for him. His intentions were to raise 5,000 to purchase him a used car. Unbelievably Leedy raised 300,000. As far as he knew he was taken to a car dealership to look at cars. When he got there, the salesman gave him the keys to his new car. He states that he did not like the car but he LOVES the car. The money will be used to do repairs on his house and for his retirement. This story shows that hard work and dedication pays off. It also shows that people really do care!

send an email request to sheffieldvictoria39@gmail.com

for more news, tips for authors, & book publishing needs,
Subscribe to this channel and share with your friends!

Posted by Sheffield Enterprises at 10:05 AM